On 15 September 2016 the Bulgarian Cave Rescue organised a search and retrieval of a missing person from a cave called “Uske”, Chetirci village, Kjustendil municipality, Bulgaria.

Earlier in the morning we received a call from the local police department, asking for help for searching the cave. The missing person was male, 41 years old and with mental disabilities. He has been living with his grandmother, who reported him missing in April 2016. Just recently the police got information that he had wanted to visit the cave.

On the previous day (14th) a team from the Fire Safety and Civil Protection searched the cave and found a jacket and a flashlight 20-40 m from the entrance. The cave is easy, only 142 m long, horizontal and dry, but it is narrow and they could not reach the end. 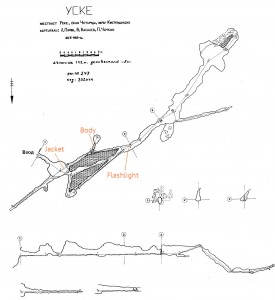 The missing man has been very agile, short and slim, so he could have passed very narrow squeezes. A team of 3 cave rescuers went to the village and two of them entered the cave around 15:30 to make a search. They found the body about 25 m into the cave in a narrow side passage. It was near the place where the flashlight has been found the day before. The passage was not so narrow as for him to get stuck. The body was found in a resting position with one hand below his head, as if sleeping.

After making photographs and consulting the police and the coroner we got permission to retrieve the body. After five months in the cave the level of decomposition was advanced and combined with the narrow passage it made the retrieval very difficult.

The Cave Rescue team, together with one volunteer from the Fire Safety and Civil Protection Department went into the cave again about 18:00. One took pictures of the detailed position of the body, while the three others dug the floor of the passage for easier access. After that two of the cave rescuers managed to place a sling around the body and gradually slide it out of the squeeze over a PVC sheet. After several months in the dry and warm cave it was very dry and light. Due to the decomposition we had to work with face protection masks and long gloves during the whole time.

At 20:05 the body was taken out of the cave for the police to inspect.

Most likely, the flashlight that the man had, failed or ran out of batteries. As a result, he was unable to find his way out of the cave, despite the short distance. He likely crawled in the side passage, turned around at the end and decided to rest there. The death was caused by hypothermia and exhaustion.

Searching for a person lost in a cave