The 10th meeting of the ECRA was held in Malačka near Split in Croatia between the 11th and 13th November 2016. It was well attended with representatives from 10 member organisations together with delegates from Poland, Spain and Turkey as guests. Overall there were in excess of 60 in attendance over the weekend.

The conference was organised in the main by the Croatian Mountain Rescue Service – Cave Rescue Commission (CMRS – CRC) lead by Dinko Novosel with a little help from others. There was a local contingent under the leadership of Aida Barišić and Frane Kožemelj that booked the location and arranged details of the local logistics. 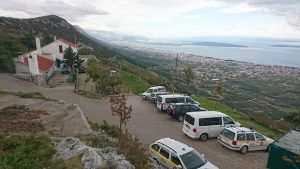 The conference was located above the Split with stunning views towards the city and to the north at Trigor. The bunkhouse accommodation was very comfortable after the initial problems with lack of water were overcome. The catering for the weekend was excellent and our greatest thanks must go to the staff for this.

There was a little weakness in the conference facilities. The talks and presentations were given in the common room of the hostel which was not fully suited to the requirements. Having said that we succeeded in getting through a full agenda with relatively little difficulty.

The conference opening with a session on “Breaking a rope during Counterweight on Tyrolean traverse” presented by Darko Bakšić (Croatian Mountain rescue service).

Video from the tests:

Continuing the testing theme, Miha Staut (Slovenian Cave Rescue) presented on “Ascenders dynamic testing“. He explained the mechanics of the testing – new versus old versus retired rope and different ages of devices.

Video from the tests:

We then moved onto an update on “Digital data transmission for caving rescue operations” provided by Giussepe Conti (CNSAS – Italy). Those attending the conference in Hungary last year had seen the earlier versions of this development and Guissepe explained the progress made.

One issue was how rescue team members were recruited. For most organisations the requirement is for applicants to be experienced cavers with a number of years and many caving trips. It is argued this means the applicants should be able to look after themselves in difficult conditions underground and not become an additional casualty. Other groups had decided to recruit from the local mountain rescue service and to train these people in caving and the additional rescue techniques needed underground. The outcome was an agreement to disagree with the approach to recruiting!

Looking at the details of education, many organisations arranged training over a weekend or over a full week on an annual national basis. In many cases this would cover the technical aspects of cave rescue. First aid training was treated as a separate training requirement.

Other organisations had an ongoing training plan depending on how busy they were. For example, the CRO (Cave Rescue Organisation, UK) has monthly formal training sessions covering all aspects of rescue repeating in a two year cycle.

Cave rescue in Bosnia and Herzegovina

Caving and Cave Rescue in Turkey

We then returned to communications when Pete Allwright (BCRC and Association Nicola) updated the meeting on “Nicola 3”. This cave radio has now gone into production with some 75 units being delivered to teams in the British Isles and to Speleo Secours Isere. Supporting documents were supplied and included was a report of use if the radios in a cave rescue by the Derbyshire team.

Pete then delivered a cut down presentation describing the recent history of the project, a short introduction to some of the technical details, and the plans for next year when extra features such as text messaging will be introduced. Included was the problems and difficulties we were having with the first batch regarding discharge of the batteries – these will be corrected in the next production run.

A practical session was held that evening in the cave, some 15 minutes drive away and up a steep climb. And being November and early evening it was of course dark.

Pete gave a quick rundown about using the radios after which a party headed some 200 metres (to be confirmed) into the cave. A successful test was carried out despite problems with the batteries. Since Pete flew over the batteries had been removed and those provided we oversized by a couple of millimetres and thus did not make a good contact. But the judicial use of the trusty Swiss army knife and gentle persuasion allowed the test to go ahead.

Note when the radios were delivered to the British teams the training comprised a 2½ to 3 hour training session in the morning followed by a practical session in the afternoon!

Dinko Novosel (Croatian Mountain Rescue Service) presented on the “Pyrotechnic tool” developed to overcome problems they have identified, not least the fumes produced by traditional explosive mechanisms. He explained the history of the development and how they were able to progress with agreement and approval of the authorities.

The talk was followed by a practical demonstration a short distance away. The removed a slice of rock from a bedding with a large bank and debris flying and just missing vehicles parked near the nearby road. But the demonstration was successful and the rock removed was shown to be in larger lumps that could easily be removed compared to the shrapnel you get from more restricted explosives.

Dinko Novosel also presented on “Explosive disposal squad”. Explosive ordnance in the form of unexploded hand grenades had been discovered in several caves in Croatia. These were deemed very dangerous and by their very nature a problem needing experts to manage and dispose.

Lana Donlagic reported about the discussions and agreements on medical treatment in case of an underground rescue how to stabilize the patient and prepare the patient before transport can start. It was recommended by the medical doctors that a medical committee should be officially formed by ECRA to be responsible for giving official advice in Cave Rescue and Underground Rescue operations what should be considered as a standard. The General Assembly voted on starting the committee. Lana Donlagic was voted in being in charge as a medical group leader for representing the group advices and standards to ECRA members and rescue teams in Europe.

Congratulations to the new board members elected by the General Assembly.

Due to the fine weather, a small gap was made in the schedule on the Saturday afternoon and a number of us went to visit the old quarter of Split. We wandered round the old Roman section then made out way to the tourist water front, returning Malačka after the sunset over the harbour.

And of course there was the evening entertainment. Thanks to Dinko at all for bringing the music system that allowed the partying to continue well into the early hours of Friday and Saturday leaving many with not enough sleep. Indeed, I recall one young lady who was going to sleep early on the Saturday but then went on to outlast me. And I trust we did not disturb those who did go to bed too much.